March 28, 2011
The other day I came across this post on my new cyber-friend's blog called FASHION ME CHIC.


Proenza Shouler Versus Target
It is not news that knockoffs are a huge problem for designers. With the economy still in bad shape, knockoffs are more than ever before in demand.

The latest company in the news for its knockoff bag is Target. A bag similar to the Proenza Shouler PS1 has been spotted in some of its stores. Target and Proenza Shouler have worked together in past edition of Go International Line. This month, a few pieces of that collaboration was re-released by Target to celebrate the program' s fifth anniversary.

“So our product is in Target right now, and then this bag comes out,” chief exec Shirley Cook told the Times. “It’s just disappointing, especially from someone we worked with.” 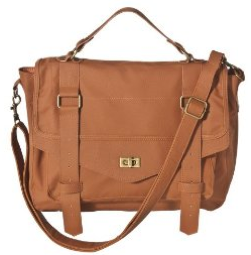 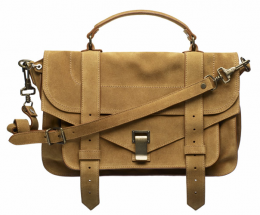 Well I just had to check out the Target version because I am one of those girl's with Champagne taste and a Kool-Aid wallet! lol So I went to my nearest Tar-Jay and "BAM" there was the bag! They had it in several colors....camel, off white, gray, army green and black. I purchased the off white one. I have not used the bag yet but I can tell you that you most def get what you pay for quality wise. I think it will make a great occasional bag (blog outfit) but I don't think it will stand the test of time nor gravity in my case - being that I put everything but the kitchen sink in my purses. It's very roomy inside (sorry I didn't get pics of the inside) and feels soft to the touch. I did notice that it has a funny smell like rubber or plastic that I hope fades with time. What do you think? 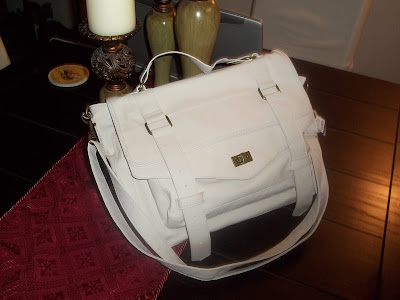 Thank you FASHION ME CHIC for all the info!

Full Figured Diva said…
Me Likey! I might have to get me one as well! Love that color!

Joy said…
Super cute! I have a tan version of a purse that looks a lot like this. It's made from The Sak, so it was a bit pricey, but also a give and well worth it.

Absolutely Mrs. K said…
Once I saw a girl with Nicholas Kirkwood shoes, when I came closer. They were like bad Nicholas Kirkwood.. so I asked her. They were H&M. this is indeed a problem and a big discussion. The devil wears prada said it too…. It is so important to choose the right color of blue for the editorial. Because this will determine what the High Streets will be selling next season. I have a bigger problem with complete counterfeits.
March 29, 2011 at 2:27 AM

Karen said…
Love the satchel bags!!! I have been wanting one for some time now!!

Nothingordinarystyle said…
Love this bag and like the color you will get a lot of miles out of her this spring/summer Love Target!
March 29, 2011 at 5:26 AM

Anonymous said…
I am so glad that you did the post. I love it. The bag looks really nice. I like the color and you are so right when you say that you will use it as an occasional bag. It is definitely not Proenza Shouler so what! That is why Target is here for. To make cheap versions of designers collection available to the masses. You got me laughing with your champagne taste with a Kool-Aid wallet. So funny!

laura said…
Oooh that is one purdeee handbag! and I love the color you chose. Too bad for the smell, hopefully it fades over time... that or you'll get used to it! :)
hearts, laura♥
the blog of worldly delights
March 29, 2011 at 1:40 PM

Sam said…
love it! i really want that bag!!

Nnenna said…
Yep- I was reading about the situation on the Cut too! I really love the look, but when I went to look at the bag online, everyone in the reviews made a comment about the strength of the smell! That sort of put me off, so please do let us know if the smell goes away or not! Thanks :)

Just Daisy said…
wow it looks really good and big! The type of bag that I can carry everything around in. I'm so going to invest in one probably camel! <33
April 3, 2011 at 9:48 AM

Nekiah Torres
Hey Boo! I'm so glad you're here! I decided to start this blog to share my love of fashion. I also felt the need to be a voice and face of BIPOC in social media because representation matters. I want to inspire and encourage you to love yourself. PERIOD! The current shape or size of your body shouldn't prevent you from loving fashion, being stylish or being seen. I believe the key to great style is finding inspiration, being creative and displaying confidence. I hope you are inspired by me! xoxo Kiah